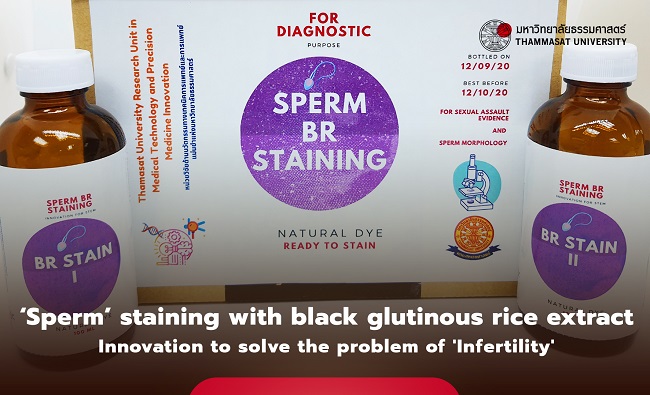 Infertility is regarded as a concern of the era. With the social conditions, socio-economic status, risk behaviors in daily life, environment, etc., the problem of infertility has now been even more complicated.

“When looking at the statistics of the current population, it can be seen that the birth rate is noticeably lower. This can be caused by a number of factors, such as social factors, drinking, smoking, or activities that reduce fertility, including having children at an older age or a marriage that is much more delayed than in the past. 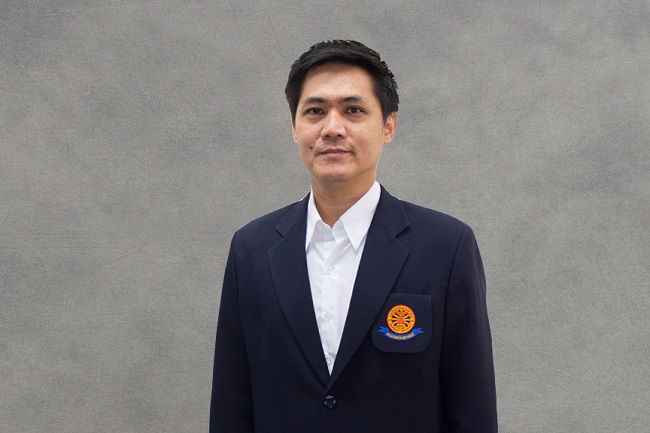 “There is an age range that affects fertility in women, that is, over the age of 35, having a child is considered too late. For females who consult a doctor, they will be able to check their hormones and ovaries, while for males, the easiest thing to examine is their semen,” Asst. Prof. Dr. Chollanot Kaset, Lecturer, Department of Medical Technology, Faculty of Allied Health Sciences, Thammasat University stated.

For sperm analysis, Thailand is now marking a remarkable progress by a team of researchers from the Faculty of Allied Health Sciences, TU that has invented the “sperm staining with black glutinous rice extract” technique to assess the shape-fertility of sperms along with estimating the proportion of healthful sperms to the total sperm count.

This invention is entitled with the official name, "BR dye", and the research work of Asst. Prof. Dr. Chollanot and Asst. Prof. Dr. Sirinart Chomean, which recently won the Outstanding Research Award of the Year 2021 from the National Research Council and has been published in three other international academic journals.

“The principle is that we use extract from black glutinous rice together with cationic additives to aid in the staining of the genetic material in the nucleus of the cell,” explained Asst. Prof. Dr. Chollanot. 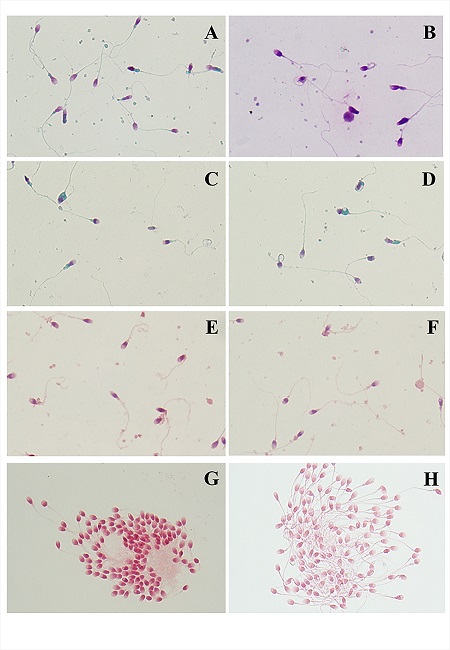 Asst. Prof. Dr. Chollanot explained that sperm staining to see the healthiness of the sperms is considered an important criterion that leads to the right treatment process, which is in line with the precision medicine policy and the use of reproductive technology to help solve infertility problems.

“The shape of the sperm is an indicator of whether or not the males are ready to have children, and will it be easy or difficult to have children? Of which, in the past, we had to rely on synthetic dyes that had to be imported from abroad only for them to stain and allow the structures of the sperm around the head, mid piece and tail to be visible. But now Thammasat is able to successfully invent a replacement dye and it also has a very high efficiency,” mentioned the professor of the Faculty of Allied Health Sciences. 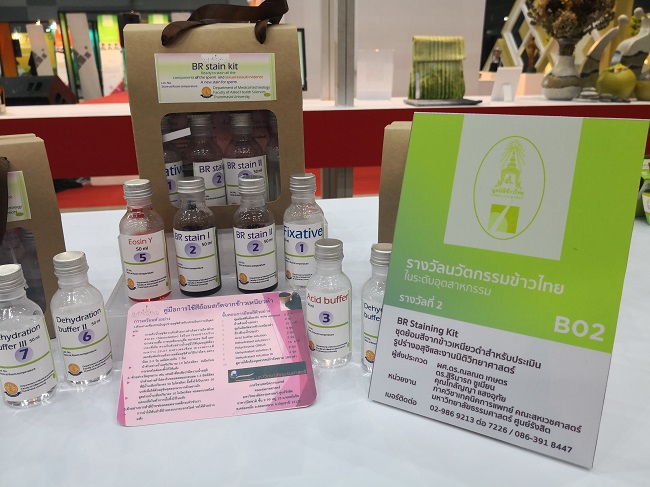 Asst. Prof. Dr. Chollanot further explained that the main objective of this research is to seek dyes that are as effective as synthetic dyes imported from abroad. The synthetic dyes are made from tree barks, in which the hospital does not only use to stain sperm but has also been used to stain other substances such as body tissues. Therefore, in the future there is a possibility that the dyes will be in short supply.

“The raw materials that we extract do not require rice grains as most of the colour pigment is in the rice husks, therefore, using only rice husks or bran are sufficient. As for the rice grains, we can cook it. This is considered adding value to rice husks and bran,” Thammasat scholars confirmed. 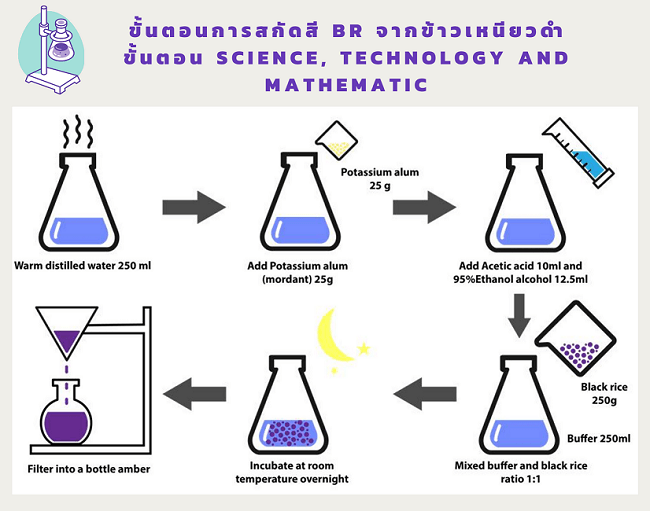 For the success of "BR dye", it will be developed further to stain the sample of vaginal discharge from wet mount (vaginitis test) in the case of women being assaulted. This is due to the fact that this type of dye can be used to stain both women's cells and sperms.

However, in the past, there has been an experiment using the vaginal discharge tested in the laboratory as a sample, it was found that the dye extracted from black glutinous rice was as effective as those sold in the market. This sample can be used for further litigation.

More than that, after developing the dye from the aqueous form into a high-quality “powder form”. The pigment powder will then be adjusted into distinct formula suitable for different types of cells or samples, upgrading products as well as formula and user manual which will reduce the procedures and workload of hospital personnel as well. 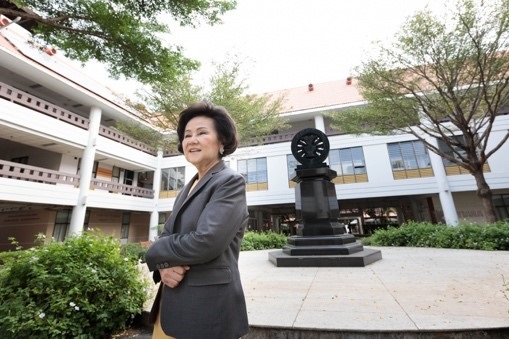 Assoc. Prof. Gasinee Witoonchart, Rector of Thammasat University said, the world today is full of volatility, uncertainty, complexity and ambiguity. Every sectors need to prepare for adaptation, especially educational institutions that, in addition to nurturing graduates to serve the society, it must also be an important force for the country when it comes to facing the rapid and severe changes in a timely manner.

“Under the so-called VUCA situation, which is volatile, uncertain, complex and ambiguous, Thammasat University needs to adapt and adjust its vision to deal with those uncertainties, both the development of teaching and learning styles as well as inventing and developing technologies and innovations,” Assoc. Prof. Gasinee stated.

In this regard, Thammasat attaches great importance to the initiation of researches and innovations that cause developmental changes in the Thai and the world society. "BR dye" is considered one of the concrete achievements that demonstrate clearly the vision of TU in striving to become The World Class University for the People. 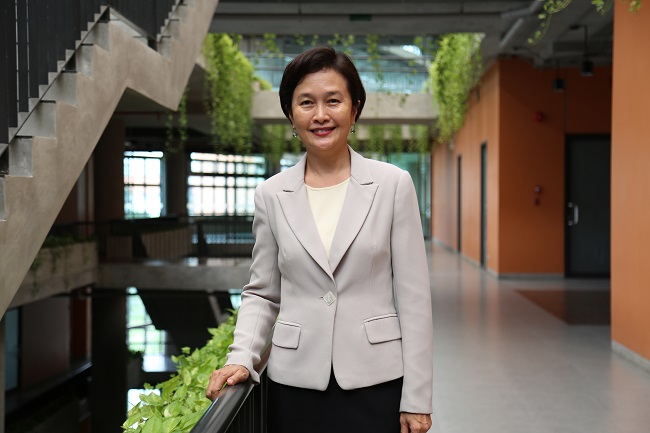 Prof. Siriwan Suebnukarn, DDS., Ph.D., Vice Rector for Research and Innovation, Thammasat University said that Thammasat will facilitate its strengths as a university that is outstanding in the social sciences and humanities. There are academic personnel who have knowledge and expertise in various fields, able to provide comprehensive education in almost all major fields of the country. With the focus on initiating cutting-edge researches and innovations, responding to needs, and creating change and developing a sustainable world society in terms of social, health services and quality of life of the people.

From now on, the direction of research and innovation development will be promoting the production of works that are consistent with the national policy and the strengths of the university, as well as expanding research/innovation to foster Startup, especially Social Business that helps reduce social inequality and providing knowledge for social development.

“BR dye is one of the proud achievements of Thammasat and Thailand to the extent that, apart from helping Thai people access to solving infertility problems, it also support stability building for Thailand, minimizes budget and helps to replace imported products from abroad as well,” said Prof. Siriwan, DDS., PhD.